Children help cave dwarfs living on Zugerberg search for their stolen gems along this interactive theme trail. The big playground, picnic areas and lovely Swiss countryside make this a fun, easy day out for families.

Zugerberg has a fun theme trail for children, with nine interactive stations along the short stroller-friendly trail. The Zugiblubbi theme trail tells the story of cave dwarfs living on Zugerberg and their search for nine stolen gems, which your children can find as they visit each station. I think smaller children (aged 3 to 8) will enjoy it the most, but the 10 to 13 yr olds in our group still had fun this year. The big playground and nice picnic areas makes it a fun, easy choice for families. There is also a restaurant along the trail also with a small playground.

The walk is mostly through forest and fields. On a clear day, you can see the alps in the distance, but this is not a trail for big views, more just a nice stroll in the countryside. Because of the low elevation, this is a particularly good option during spring and fall when mountain transport is closed. We’ve been as early as April, which was very nice with lush green meadows and wildflowers. In October, the fall colors are quite nice as well.

This is a 5.4 km loop trail, starting at the top of the Zugerberg funicular. The map below shows the numbered interactive station along the trail. It also shows the lettered storyboards that tell the story of the cave dwarfs and their gems, setting the scene for the experience.

The trail is a easy, wide dirt path through fields and forests, partially on a very lightly traveled paved road. The whole trail is suitable for strollers, with one stroller detour at the lower end of the map (the dotted line, clearly marked with trail signs), where the main path has a short section on a bumpy “root” trail through the forest. A variety of carved wooden animal sculptures are also scattered along the trail.

There are two picnic areas, both with multiple fire pits, wood, and tables. The Schattwäldli Adventure playground near the start of the trail has the big playground with swings, zip line, see saw, play house, etc. Brand has better views, lounging sun beds and a couple marble runs to entertain.

This trail is best accessed by the Zugerberg funicular, which is located a bit south of Zug on the east side of the lake.

By car: Drive to Schönegg 14, 6300 Zug and park in one of the metered spots next to the funicular valley station.

By transit: Take a train to Zug, then bus 11 to Schönegg. The funicular is adjacent to the bus stop.

Alternatively, you can drive directly to the trail on a narrow, winding one lane road as shown below. This road is not always open to non-local traffic, so it’s possible it will be closed when you go. That’s why we recommend taking the funicular instead. If you drive, when you get to the top, before entering the little “village” at the top, park in the spots along the road and continue on foot to the Zugerberg funicular station, where the trail official begins.

The trail starts at the top of the funicular station, where you’ll find a restaurant and nice view.

Don’t forget to pick up your “Schatzsuchekarte”, aka treasure hunt car, at the funicular station. They are free to take next to the maps and other brochures. In the booklet, there is a secret word to discover. At each station, you’ll find a gem and a letter to write into this puzzle. The word is in German, but it’s easy to figure out.

After you complete your card, don’t forget to stick it in this post box at the beginning of the trail before leaving.

The trail starts to your right on a dirt footpath near the intro sign shown below. All text is in German and English.

There are a few fun bits along the path before you reach the gem stations.

Occasionally you’ll get wonderful views of the lake and surrounding countryside.

It’s pretty through the forest. There are still some of the animal sculptures from the old sculpture trail that was replaced by Zugiblubbi.

There are several storyboards at the beginning of the trail, telling the whole story about the cave dwarfs and how their gems were stolen, etc. The text is in English and you can even listen to the story with your phone.

Just follow the purple signs for the Zugiblubbi trail. When the trail forks, stay to your left toward the playground. You’ll see a couple characters from the story.

Here’s the big Schattwäldli playground that you’ll find on your left. The last time we went, it had a few fire pits with wood, a zip line, these playhouses and swings. The Zugiblubbi trail continues past the playground into the woods. This playground can get really busy on sunny days.

Back on the trail. Lots of the stations involve walking on wood in some form. 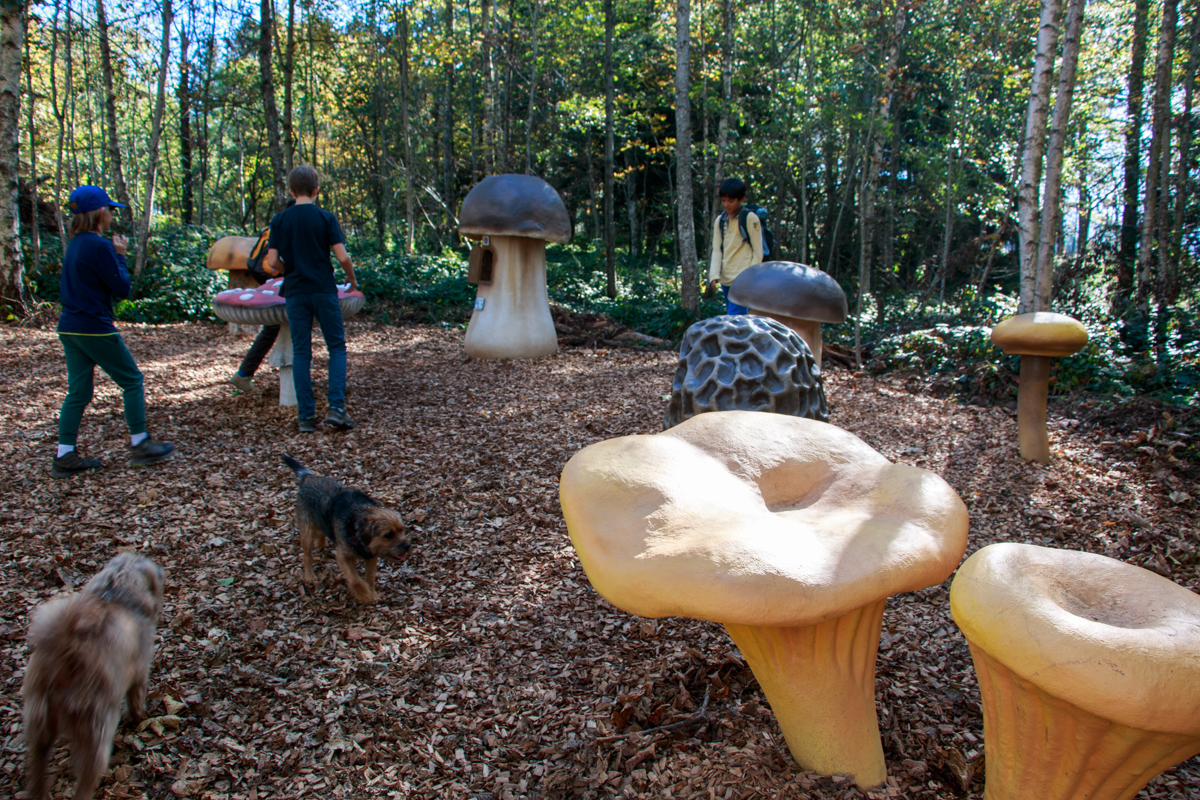 Look out for various sculptures along the way.

About 15 minutes after the big playground, you reach another picnic area with a couple fire pits and a very big field where you can picnic. On a clear day, you can see the Mount Rigi and Pilatus in the distance.

Kids had a blast sending large wood marbles down this marble run. Little kids can surrender their pacifiers to this “Nuggi” treasure chest.

Hit different types of wood to see how the sound varies.

A little labyrinth ending at a spider guarding a gem.

Of course, a little barefoot path.

Keep an eye out for more animal sculptures.

Lots of fall colors in this lovely forest.

Here the trail splits, with a detour for strollers staying on the wide path to the left and foot traffic heading up steps onto a lumpy trail in the forest. They’ll reconnect in 10 minutes or so. There are no gems for the duration of the detour.

Guess which animals made these footprints.

The path though the the meadows before reaching the road.

Now joining the paved road leading back to the playground.

On the paved road, before you get back to the playground, you’ll pass the Hintergiessboden restaurant, which was cozy and unexpectedly delicious. They have high chairs. Above is their “signature” garlic bread that was super yummy.

The playground outside the Hintergiessen restaurant.

Last two gem stations before reaching the end of the trail. On the left, you have to slide the ring around the puzzle without touching the sides. My kids loved this!

Let’s admire one last view before heading back down. Don’t forget put your completed “secret word” card in the dwarf post box at the funicular station. The funicular only runs every 30 mins, so check the schedule so you don’t have to wait too long here.

A last tip. The mountain train to Zugerberg sells a few postcards with vintage designs as shown above. I’ve collected postcards like these from all our adventures and I was super excited to add these to my collection.

* By subscribing you agree to our Privacy Policy and agree to receive emails from SwissFamilyFun.
You may unsubscribe at any time.

Hi! I’m Tanya and our family has been living & hiking in Switzerland since 2005, collecting dozens of fun hikes and activities for all ages and abilities. More about us… 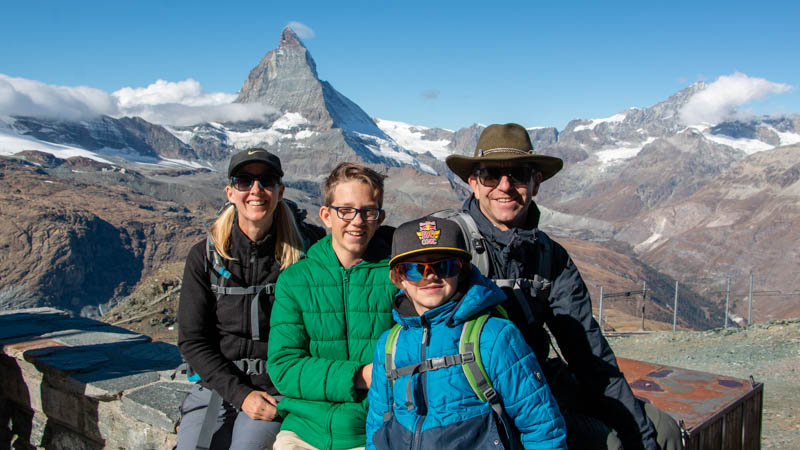 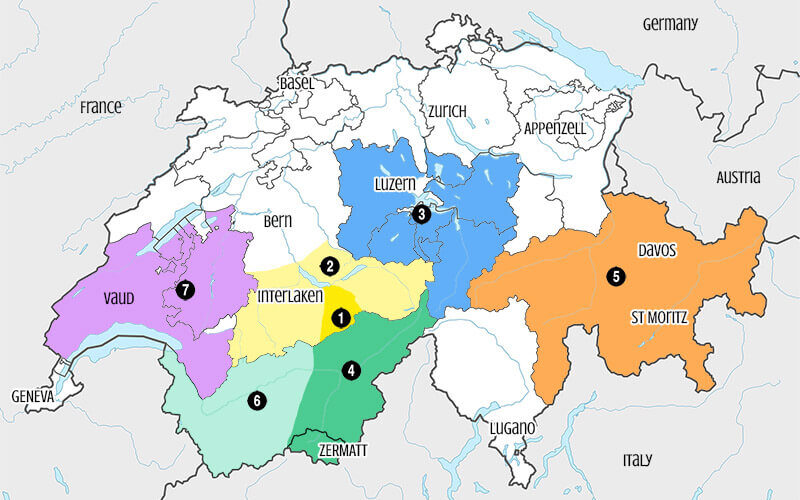 Sign up to receive our weekly newsletter with tips for your weekend and links to new posts.